My favorite knife club, WRCA, has obtained several really nice knives for their raffle at our yearly fund raiser.  It’s a knife show of course and it’s the weekend after Mother’s Day.  That’s May 18 and 19, 2019.

We want to gather as much attention as possible with the hope that this will translate into attendance.  You see, attendance is the lifeblood of any show, knife, gun or model train.  It’s obvious that vendors will only rent table space from you if they have a good chance of making sales.  The promotor can’t guarantee sales, but he can (and should) shoulder much of the blame for poor attendance.

The question is how to get people interested in attending?  The best way is to tell the general population and remind them constantly.  This is how blockbuster movies do it.  They create interest by constantly telling you through the media, internet, weekly magazines that the blockbuster of the season is coming.

Not having the budget they have, we’re going tackle the problem by guerrilla advertising.  One step is to get pictures and information out about our yearly knife raffle.

I had to set up my photo booth and take some photos.  It’s not a real high tech operation.  I use a thin white cloth as a diffuser and two of the brightest fluorescent lights I could find.  With the help of several reflectors and the all-important tripod I try to get studio quality images.  It’s been known for some time that great images make lasting impact.

So these will be on our website, on my blog and Facebook page with the hope of attracting potential customers who want to take a chance on winning as well as attending our show May 18 and 19, 2019. 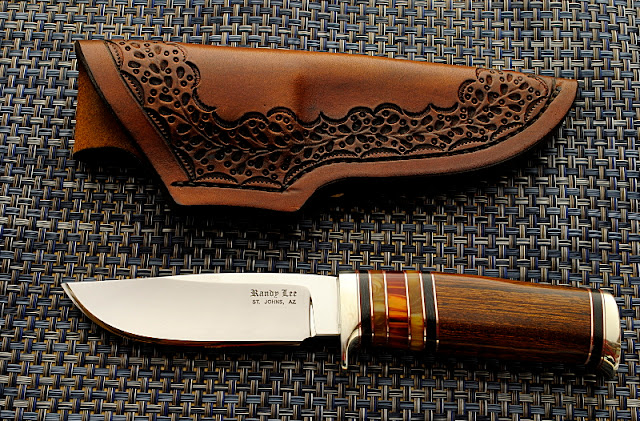 I believe this is first prize.  I think it is one hell of nice knife.  More on this topic in the future.

Speaking of shows, I just attended the Lehigh Valley Knife Show.  It’s within spitting distance of New Jersey and (almost) New York.  We get a lot of traffic from these states because of their draconian knife laws.  It’s tough to be a collector when you feel harassed about your hobby.  I had a number of potential customers after specific products, like Spyderco’s rust-proof H1 steel, but unable to purchase it because the blade is too long.

One customer uses the thinking that most, if not all criminals, use cheap kitchen knives and other POS knives.  His defense is to tell the police officer, “Look, it’s a $200 knife.  I have a car with another $800 dollars’ worth of tools I use on my job, so it isn’t likely I’m holding up or mugging people outside of bars to make $30.”

He claims it works so far…..
At the show I ran into a fellow who run knife classes for Girl Scouts.  It’s based on a Swedish program, sadly now extinct, that taught a quarter of the grade school population how to cut with a knife.  His students learn how to make cuts like a V-cut or stop cut.  When they are done I understand they have a little carved figure.  Very cool.

Imagine grade school children learning how to carve in a society where a drawing of knife gets you sent to the principal’s office.  Amazing.  I wish him good luck!

While I was at the show I passed out flyers for the WRCA show at the Massillon K of C Hall, May 18 and 19th.  (I bet you were wondering if I would get around to that again.)

Look, it’s five hours away, for some of these vendors it’s an additional 2-3 hours on top.  It’s a long way to go to sell knives.  Part of my sales pitch was, “Look, come sell knives on the weekend, visit the FootballHall of Fame on Monday and by the way, the Rock and Roll Hall of Fame is just up the road in Cleveland.  You could have a great time.”

One guy told me he hates football, okay what about rock and roll?  He hates that, too.  Okay, I can give it back, too.  I said, “What you hate football?  Are you un-American?  What are you?  A Commie?”

Well, he started to laugh and said “Okay, give me a flyer.”

I’ve said this before.  Life is hard and everyone is working hard to get by.   If someone offers you a flyer to participate in an activity you are currently involved with, just say thanks and take the damn thing.

Here are a few images of the knife show.

Swiza is a relatively new knife company, but they have a long history as a clock maker.  Louis Schwab established the Swiza clock factory in Moutier, Switzerland where they have a long reputation as a premiere clock and watch maker.  But change comes to everyone.

In 2006, the Schwab family transferred ownership to Bedonna Holdings.  Who are they?  Good question.  Bedonna appears to be a holding company whose business is making money.  Like all holding companies, they own several companies that make products the public wants.  Kind of like angels on “Shark Tank.”

At some point Swiza got involved with estragon, a design company.  Yes, it’s a lower case “E,” all very artsy fartsy.  But Dirk Fleischhut and André Lüthy appear to have the chops.  They helped Swiza get into the knife game with a very interesting knife.

They opened a plant in Jura, Switzerland, and in Oct 2015 started making Swiza knives, a creditable challenger to the Victorinox/Wenger Empire.

Here’s a little aside I found interesting: the geology term "Jurassic" is derived from the Jura Alps, which date to that era.  Knives and fossils in the same blog, must be a record of some kind.

The first thing you notice is the nail nicks or blade openers.  They are elongated trapezoids holes that penetrate the blade or tool.   The second thing you notice waits for you to pick it up.  The bolsters have a soft silky feel.  Rub your thumb over the closed knife.  There aren’t any sharp edges with the exception of the back end of the tweezers.  You’ll find a curious double step that lets you grab and remove the tweezers very easily.

The 3 inch blade is milled from 440C stainless steel and has a Rockwell “C” hardness of 57.  The blade locks open, a touch I have always liked.  The release is hidden under the white Swiss cross on the handle.  It takes a little effort, but that’s actually desirable in a locking knife.

Various tool configurations are available.  This knife has in addition to the tweezers and main blade, a #1 Philips screwdriver, a #1 and #3 flathead, bottle opener, can opener and a reamer with sewing awl eye.  I’ve always been curious about the sewing awl eye.  If you’re using that function, that’s going to be a very coarse repair which will probably do more damage than the rip, or the fabric is so coarse you can wiggle it through without cutting large holes.

The tools appear to have been hardened to 54HRc.  Why such relatively low hardness, you ask?

It’s not low.  We’re spoiled by pricey super steels with Rockwell values in the 60s.  At these levels bending the blade is likely to break the blade.  As Ernie Emerson once wrote, a bent blade is still a knife, a broken blade is just expensive junk.  (My apologies if the quote is wrong.)

At these levels of hardness you should be able to resharpen the edge with a fine grain rock.  A number of years ago, I attended a mini-class where it was claimed you could sharpen a blade with mud. That is, if you had enough time, and if the knife was dull enough that even a slight improvement was desirable.  I’d look for a fine grain, flat rock first.

All in all, I think you’ll find the Swiza up to all your urban cutting needs.  This Swiza, with its leafy green scales has a suggested manufacturing price of around $56.

"A knifeless man is a lifeless man.”  Nordic proverb.

I recently bought a set of puukko knives.  The set has the curious name of Double Big Hunting (Knives) and was designed by Harri Merimaa.  Harri is from Bothnia, a providence of western Finland and is a third generation knife maker.  I think they are very nice knives and I'm very happy to have them.  Nice job, Harri!

The blades are high carbon steel, the smaller knife is 84 mm (3.3 inches) while the larger is 154 mm (6 inches).  Both rest in a single brown sheath.  It’s the handles I found especially interesting.  Each handle is chiefly dyed curly birch capped with elm wood.  The rakish cut of the handle butt provides a stop to prevent your hand from sliding off. 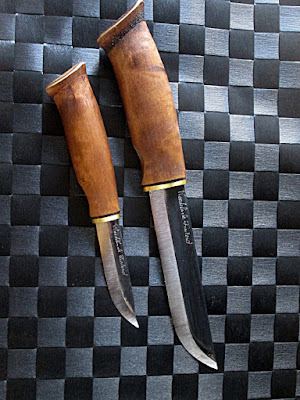 Puukko knives are so characteristic of Nordic countries, it’s hard to mistake them for any other knife.  Surely you recognize them?  Most puukkos have a slight shoulder but no ricasso because where the edge ends and the handle begins is where most power can be applied.  The blades have a long flat edge with no secondary bevel.  To sharpen, the bevel is place flat on the stone and then polished. 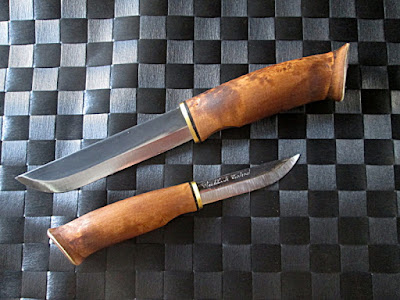 Nor do puukkos typically have a guard to protect your fingers.  A puukko knife is primarily a cutting and building tool and not a tactical weapon.

A classic blade would be the width of your palm, but you’ll find them 90-120 mm (3.5 to 4.7 inches) long.  This creates a market for both men’s and women’s puukko knives.  Women’s, (hey, it’s a sexist world) are typically shorter bladed for ease of food preparation.

In the Nordic countries, the puukko is an everyday knife that is used for everything from hunting, fishing, and garden work to opening boxes in the warehouse.  Despite being an everyday item, receiving a good puukko as a gift is considered a great honor in Finland.  Both Boy and Girl Scouts consider the puukko their scouting symbol as well as a handy tool. 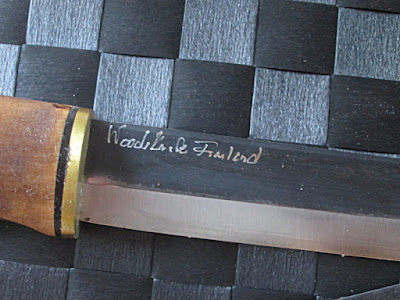 In 1977 Finland banned carrying knives in public because, (wait for it…) they could be used as a weapon!  This law appears to be seldom enforced.  In my opinion, any law that depends on the personal outlook of a police officer is discrimination.

As an aside, the puukko is the only civilian item which can be openly worn as a part of a soldier's combat gear without breaching the regulations of the Finnish Defense Forces.  Because puukkos are traditionally considered to be very personal items, the military does not supply conscripts with them, and most bring their own with them.  It’s hard to imagine basic training with knives, but what do I know?