Boker knives are some of the hidden gems in the knife market.  Mostly because they don’t have the advertisement clout others do.  But smart thinkers and cagey knife users should be thinking about the Boker brand.

Boker traces its roots to tool manufacturing the 1800s in Germany.  Swords were the name of the game, but they diversified into other edged products.  The family owned company sent representatives to America and opened up manufacturing in America.  They both shared the “Tree Brand“ logo.

During the Second World War the Solingen plant was destroyed and Boker USA took control of the trademark.  In the 1950s the German factory was rebuilt.  Over the years the American company closed.  The German company changed hands but in 1986 Boker reacquired the rights to the American brand and established facilities in Denver, Colorado.

Boker has manufacturing  in Germany (of course!), Argentina, Taiwan and China and now in the USA.  They produce three basic levels depending on the price point: Boker, Magnum and Boker Plus.

I once did a special order of a special knife to commemorate the customer’s son-in-law’s military promotion.  It was a beautiful Damascus bladed folder.  The blade was carved from 300-fold forged Damascus steel from the barrel of a German Leopard 1 tank.

So if your introduction and thoughts about Boker are from the Magnum $7 knife pile, think again.

The Boker website claims the handle is aluminum but they also claim the blade is wood.  Hummm, someone’s website has been hacked.

The blade shows the same powerful spring action I’ve seen in Benchmade autos.  Block the blade from completely opening and when the obstacle is removed, the spring still has enough force to finish the opening and lock the blade in place.  The pocket clip is reversible and the handle sports a lanyard hole.

The finger scallops fit my hand pretty good for a small knife.  And between the scallops and the jimping on the blades spine and handle you get a very good grip.  The blade release is a basic plunge lock system.  This system has been used for many years and is very dependable if you keep it clean.  But isn’t that true of all machinery?

I suspect it uses a coil spring and the knife has Torx screws so you can replace the spring if necessary.

I have come to like auto more and more.  I don’t suspect they open any significantly faster than the assisted or many of the tactical knives.  But I do think pushing a button is a gross motor skill and doesn’t require the fine motor skills which are lost under the influence of fight/freeze/flee conditions.

I wish I could take it for a drive, but it isn’t mine.  I have no doubt it would serve me well.

It retails for about $55 but you can get it for less if you shop around.  I’ve got two for sale, but that’s another story.

The current record holder is Luis Bernardo Mercado (Fremont, CA.) who comes in at 2175.  Congratulations, Luis!

These knives represent 6 continents, 29 countries and 400 different brands and custom makers and 50 years of collecting.

The process of documenting the size of your collection isn’t trivial.  Perhaps that’s a new category for Guinness: most difficult documentation.  Of course as soon as you win this one, it’s likely the documentation of your documentation would cancel out your win.

Luis started collecting at five, so it may be too late for some of us to attempt to claim that title for ourself, but he’s confident the title is only transitory as he’s the first to claim it.
at April 25, 2017 No comments:

With the arrival of warm weather my grass has redoubled its effort to make my yard an uneven carpet of green.  Before getting the lawn mower out I needed to resharpen the blade.

I’ve stopped taking it to a lawn or garden center and getting the blade resharpened.  I bought a little attachment for my Dremel tool.  The attachment screws on to the front of the tool and come with a special diameter grinding stone.  A guide helps me hold the blade angle and lets me grind out the really dull and damaged
areas.

On my electric lawn mower the blade rotates at 3600 times a minute.  A rounded edge will cut the grass by tearing it, but cleanly cut blades make for a better lawn.  Better looking grass without significantly increasing my work load is my goal, so sharpening the blade makes sense.

I clamp the blade down on a sheet of plywood and run the Dremel grinding stone over the old edge several times until the old discoloration is gone and so are the majority of nicks and gouges in the edge.  I use the plastic guide to hold the angle, but perfection isn’t required.  A fine dry stone pulls the wire edge off the other side.  I should mention my mower blade is a classic chisel grind.  I test the sharpness by shaving the edge of the plywood board I use as a work station. 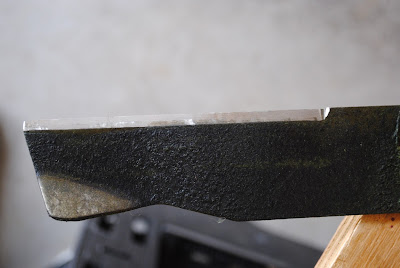 The last step before reinstalling the blade is to check the balance.   If one side of the blade was significantly heavier, the mower would vibrate and damage itself, perhaps even break a blade.  The heavy side just gets another pass and a second balance check.  Repeat as required.

Since I was in sharpening mode I got out my Ken Onion Work Sharp blade grinder and sharpened my hatchet.

As you know I recently discovered my SOG camp hatchet was extremely dull but luckily my friend Derrick brought his Gerber hatchet.  Having a fire in the fireplace as part of the evening’s entertainment and as a back-up to winter storm power failures is a nice luxury.  The price you pay for this is splitting wood into suitable burning size.  A sharp hatchet is required and mine needed a good sharpening.

I selected the course belt and an angle of 25 degrees as a starting place and ran a black marker pen over the edge.  The marker helps me see what I’m doing and where I’m taking metal off.   A couple of passes and I had removed the entire marker pen.  I flipped it over and did that side.

The blade looked good so I changed to a medium grit.  That took a little more off and I was satisfied.  But how you really tell if your axe is sharp?

I decided performance was the only way.  I grabbed a section of a landscaping tie and a length of pine 2X4 and tried it out.  I was less than impressed.

The hatchet didn’t cut the wood fibers, but crushed them.  Definitely not sharp.  I changed the angle to 10 degrees and repeated the process.  This angle worked better.

While I was touching up the edge I noticed the cutting edge wasn’t centered in the blade’s secondary bevel.  This typically happens when one side of a blade is sharpened more than the other.  I played with it for a while and discovered one side the bevel is flat ground while the other is slightly convex.  This bevel asymmetry is the cause for the non-centered edge.

I worked on the edge a bit more and called it finished.  It’s not perfect, but it’s sharper than it was.  Chopping pine boards may not be the best material to judge hatchet performance.  I’ll look around for actual logs to try it out.
at April 24, 2017 No comments:

I just had another person ask me if my Spydercos were real.

I’m getting tired of this.  I am an honorable knife dealer and would not sell you a knife you didn’t want, just to make a sale.  Nor would I sell you a counterfeit or broken knife.  I buy from one of the largest wholesalers in the country and they buy directly from the knife makers.

I’m going start telling those asking me that question, “If you want to buy counterfeits, you’re going to have to go elsewhere.”

This is a growing problem.  Last January, Spyderco sued the Kittery Trading Post for selling counterfeit Military and Paramilitary identified by Kittery as Spyderco clones.  Now maybe you think it’s cool to own a counterfeit, after all you paid $35 for a $100+ knife.  Until it fails, breaks or you find you have to sharpen it all the time.  Maybe you trade that counterfeit to a buddy (who you really don’t like, otherwise why would you take advantage of him?) for something they have or to settle a loan.

But you know, you’re hurting the knife community.  You’re making a statement about what kind of person you are and what kind of people you want as friends…  I hope you eat shit and die on your birthday.

Thread Vs Tread
Thread means a fine cord made of two or more twisted fibers.
Tread means to trample on or crush underfoot.  It’s also the part of the tire contacting the ground.
Language changes, so I looked  them up in the Encarta Dictionary just to make sure I knew the differences..

I just saw the back of his sweatshirt.  It had a very nice libertarian statement about being race, religion, and gender blind and emphasizing a true patriot loves his country but not necessary his government.

I agree with many of the things sweatshirt stated.  It ended with the famous quote from the Gadsden Flag that even non-history buffs surely remember.

But the real quote is “   tread on me.” and not as his sweatshirt stated, “…thread on me.”
Perhaps it’s a quote from a historic group of embroiderers.

Kydex continues to rule in the knife sheath and gun holster world.  It has a lot of advantages and a few disadvantages.  It doesn’t stretch out of shape, rot from exposure to water or corrode brass fittings because it doesn’t have leather’s fatty acids and it’s strong and difficult to puncture.  I really like the puncture resistance aspect.  A fall in the outdoors can be dangerous enough, but cutting yourself because the knife split its leather sheath can be fatal.

Having said that, leather is quiet and doesn’t make a scratchy sound when brambles brush across it.

I saw a kydex worker at the last Medina gun show and he had an interesting partial solution to the holster/sheath dilemma.   You know what that dilemma is, don’t you?

The problem any holster seller has is never having the right holster or sheath and too many of the ones nobody wants.  Add the problem of color or design and it’s a small wonder anyone wants to sell holsters/sheaths.

This maker had several large clamshell-like wooden crates on wheels containing his kydex press, sander, band-saw, buffing wheels, jig-saw and heat source.  It was like bringing your factory to the show.  Next to him he had a table with several previously made holsters for some of the more common guns.  He had just finished making a knife sheath when I came by.  He also did a very nice, compact holster for a Sig with a light on it.

I didn’t ask prices, but it can’t be cheap to make holsters/sheaths during the show and have to transport all that equipment.  Still it’s an interesting development.

I suspect the real answer to custom-fit holsters/sheaths will be a laser scanner interfaced to computer driven 3-D printer.  You read it here first!
at April 16, 2017 2 comments: