The rumor mill is abuzz!

No, it's not about about what's-her-name or the other one's boy toy.  This is important.

A reliable source claims Tactical Knives is stopping production.  No date on the finial issue.

The publishing game isn't what it used to be. Readership is falling off.  Many people blame the Internet with its free (almost) content, online blogs, videos and ability to constantly deliver new daily content.

I'll miss Tactical Knives.  But then I always enjoy reading.  Sitting in the doctor's office reading magazines from last year never seems a hardship to me.

The expression “It’s a poor knife that cuts only one way” has found its way, with some minor modification, into detective fiction, adventure romances, and science fiction, just to name a few.  I’ve even pointed out to students that a tactical flashlight points in both directions.

But the Spyderco Civilian is a knife that cuts only one way.  It comes with a special note.

Here’s the text.  As an ‘abridger’, my apologies for any misrepresenting the sentiment behind Spyderco’s statement.

“Spyderco has traditionally maintained what we call the “White Hat” position.  …that the future of mankind in the world must lie in cooperation and greater socialization.  …We recognize that a knife ... can be used (solely) to defend oneself…(but) we have never produced such an item.  Spyderco … caters to the law enforcement personnel on a worldwide scale.  They would be the good guys, or ‘White Hats’.  It has been requested that we … provide an effective last-ditch defense in assisting the “White Hats.”

While it’s true the Civilian isn’t designed to stab, it is designed to make an ocean cut.  With the reverse-S shape and the tremendously powerful Spyderco serrations, anyone you cut will be cut deep and wide.  It’s also well established that many effective targets on the human body are just under the skin.

The Civilian and its ilk (the Matriarch – versions 2 and Lil’) aren’t the only Spyderco folders that focus on the grittier side of self-defense.  The P’kal has very strong roots in self-defense as does the Yojimbo 2.  But only the Civilian was designed solely for self-defense.  It also comes with a tag that amplifies its purpose:  “Notice – This knife was not designed to be used as a utility knife.  Its unique design will not support everyday use…” 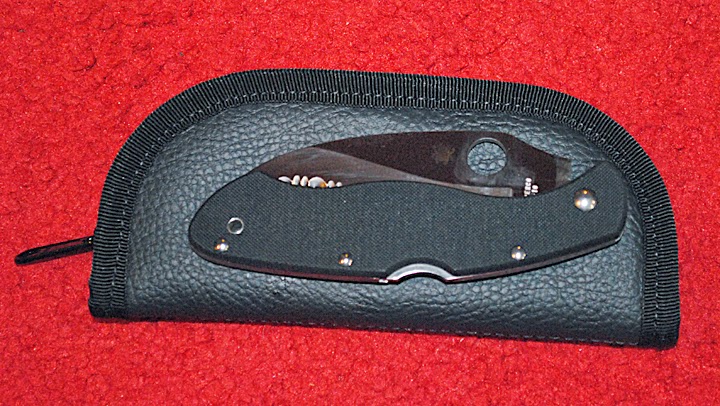 Why does Spyderco feel it’s necessary to include this statement?

I don’t know.  It could be legal preemptive boilerplate; maybe it’s an attempt to assuage personal feelings that such things are still necessary in this world.  Maybe it is guilt from knowing that no matter what you attempt or intend, someone will misuse it.

Let’s get to the Civilian’s specifications:

Do you need one?

This isn't a typical, "If I don't have one, I must need one" answer.

I, on the other hand, took his Civilian out of the soft-sided pouch it comes in and opened it.  The Spyder-Edge glittered like jewels set in silver.  The reverse-S blade has grace and flows outward from your hand.  The insulating G-10 is warm to the touch and the handle naturally finds a sweet spot in your grip.  My thumb, trained from decades of using Spydercos, found the hole without any thought on my part.

I made a few air cuts.  The Civilian almost seems to anticipate your movements before you do.

It’s a work of art, lovely and f@^king scary as hell.

*Yeah, it’s metric.  The only four places in the world still using the English system are England, Liberia, Myanmar and the US of A.  Let’s get with it!

Re-branding: It's Not Just for Wall Street

I get a lot of catalogs.

All sorts of catalogs ranging from clothing, woodworking equipment, outdoor stuff, guns, shooting supplies and of course, knives.  I read them all.

I recently got a catalog from a company that sells high-end work clothes.  I’m sure you’ve seen the catalog.  You can purchase a canvas sport coat or extra long tee-shirts to prevent butt crackitis from them.

Recently I saw a knife that’s an old favorite of mine.  It’s the Boker Sub-Com.  It’s been re-branded as the Boker Biscuit Knife.

The re-branding seems to have affected the price.

It’s a nice knife and it’s true.  It fits well in the watch pocket on men’s jeans.  Not too many of us carry pocket watches any more. That’s kind of a shame.  There was a certain class to taking the watch out of your pocket and pushing the stem in to pop the protective cover off the crystal.
The 'Biscuit' also works well as a money clip.

I’m getting ready for the Blade Show.  We called the hotel to make a reservation and was told:


Sunday morning at the show should be interesting.

I just put a Blackjack Panga on eBay.  It was made at the original Effingham, Illinois company.

The blade is made from 420HC steel.  According to that fountainhead of knowledge, Wikipedia, “420HC is a higher carbon content 420 stainless.  The HC stands for "high carbon" and it can be brought to a higher hardness than 420 and should not be mistaken for it.  Buck Knives uses 420HC extensively.”

Blackjack, it seemed to me, wanted to be the factory version of Randall Knife.  I have a Randall in a display case and a similar new Blackjack.  Based on appearance and feel, they have succeeded.  But Randall has this cache: handmade, served in Vietnam and a favorite of our Armed Forces.  I have a friend who told me when he went in the service his father gave him a Rolex watch and a Randall.  He’s been hooked ever since and has quite a collection.

With Blackjack you can buy the same knife as a Randall, pay half the price and get it today and not after the five-plus year wait Randalls routinely have for a “custom” knife.  But somehow the original Blackjack Company never took off.  Maybe that’s because they were copying and not creating their own signature look.  Whatever the reason Randall remains HOT!

The Panga was billed as a machete.  I’ve swung a more classical, heavier machete and it’s clearly a job for the young and energetic.
Based on that experience I’m not sure the Panga’s edge would hold up to clearing vines and cutting brush.  It may have well have been designed for a more specific use in the jungle like butchering fish, cutting small vines for rope and discouraging other people.  It looks like a long butcher knife.

But I could be wrong.  Blackjack used to advertise the knife cutting a 1-inch manila hemp rope suspended in mid air.