It’s all a bad mistake and it’s getting worse. You got off at the wrong exit, the bar wasn’t what you thought, and the address said north not south, the neighborhood changed. There are a thousand reasons you’re in deep sh*t, but all you want is to go home in one piece.

They wanted more than your money and you knew they‘ll kill you and get your address and keys. While you were toe-tagged John Doe, your wife and daughter would be desperately checking hospitals. They would never know until too late the mad dog predators stalking them.

So you ran from them. They split up and chased you and by now you’re surrounded. Safety lies in the direction you came, but at least one thug is following you, driving toward the rest. They’re smart, organized and vicious.

You have a plan too. It’s not your best plan, but it’s your last plan. You’re going hide behind the dumpster with your closed knife in your hand and hope they pass. If not, you’re going to lure one in close. It’s important he doesn’t see the knife, so it’s got to be closed. When you stepped over toward the closest one you’d hold your wallet up and step even closer.

Your last move would be a surprise. A fast step, grab the thug and pump the blade in and out of his stomach eight or ten times as fast and hard as possible. If there was a second thug, you’d turn on him with the blade. It’s a terrible plan. It’s all you have. 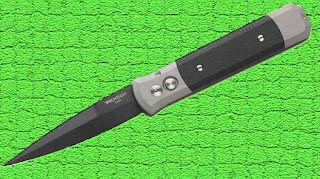 Trouble is; your cold, bloodless fingers can’t hold the side opening auto knife without dropping it. And forget about the assisted or manual openers, fine if you can open them before you need them, but what if the person in the alley isn’t the thug? Did you really want to step out of the shadows with an open blade? What you need is an OTF.

I saw nice, clean out-the-front Piranha Excalibur at work. It’s a cool knife. A fellow could hold the knife firmly in this hand wrapped around it and push the button to open it. The double edged blade flies out the front. You don’t hold it with a partial grip like the ProTech out-the-side autos. Heck, that grip is already half way to losing the knife.

My opinion: A real combat knife needs to be either fixed blade or out-the-front auto. Assisted openers and manuals have their role in CQC, but out-the-front has them beat.
at March 18, 2010 No comments: Links to this post

Guess What I Have In My Pocket

I was at a gun show this week-end and heard the best reason to own more than one knife:

“I carry a knife everyday and I get tired of the same one.”

Of course what I mostly hear is: “I’ve carried the same knife for forty years. And I don’t understand….” They always reach into their pocket and pull out –
(Choose one)
A- a one and on half inch long two bladed Schrade trapper with 50% of each blade sharpened away;
B- a dull Victorinox Classic which has never been sharpened and has a bent blade from trying to cut string.
C- a small bone-handled Italian stiletto switchblade with a bolster release and a carefully polished razor edge.

Answer: I’ve never see C, but variations on A and B are common. These are the same folk who don’t understand that a $12 knife when gasoline was 35 cents a gallon is roughly equal to an $85 knife to day.

Well, I hope I live long enough to be like them someday.
at March 14, 2010 No comments: Links to this post

WRCA: Knapping One Edge at a Time

At first thought it’s hard to see the connection between a flint knapper and a knife show. The differences are obvious. Knives use modern metals, plastics and production processes. Knapping flint arrowheads calls for rock, antler and another rock which you press together. Total different. Right?

Still, I’m sure the second, maybe third tool man ever used was an edgy rock. I think the first was the hammer stone. It seems obvious to me. Pick up a rock and smash something. The tie for second and third place goes to fire and sharp edges. I suspect it was sharp edges followed by fire.

She: “My sharp rock is dull again. Go find me another one.”

He: “I just got you that one. Those things don’t grow on trees.”

She: “Well, unless you want fur on your meat, you better find me another one just like this one.”

She passes it, he butter-fingers it and the stone tool breaks on the cave floor.

Picking up the damaged stone tool he cuts himself on the newly sharpened edge and an idea takes root.

He: “Here. I’ll be outside talking to Uglar. Call me when supper is ready”. He walks off acting like he had planned it.

The seed of knapping was planted. You can chip stone to create a sharp edge. 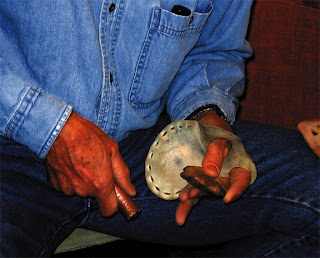 The knapper holds the stone in his left hand and strikes it with a copper bar with his right.  It's art in motion, a skill once in great demand now on dispay at the Western Reserve Cutlery Association's Knife Show


I had a chance to watch a flint knapper explaining his art to during the Western Reserve Cutlery Show. He explained how flint has very fine grain. We call it cryptocrystalline and it has no cleavage planes. When force is applied with a soft tool, like an antler, or rounded copper nail, a conchoidal fracture, called a Hertzian Cone forms and material flakes off. By skillfully applying this principle the knapper can flake off material to form an incredibly sharp edge.

That’s the connection. Knife, sword, axe, and arrowhead: It’s all about sharp edges.
He explained that he wasn’t using flint but chert. Flint is a rock that forms in chalk deposits. Chert is a sedimentary rock that forms in any deposit.

Chert? Sounds like what a Rocky Balboa bird would say: “Hey! CHERT!”
at March 10, 2010 No comments: Links to this post


I had a lot of fun at Western Reserve Cutlery Association annual knife show. This year it was held at the Dover Armory. Nothing can beat the atmosphere of the Warther Museum, but the Armory had a lot more space.

Parking was crowded, but at lot of us parked down the street and walked back to make more room for customers. 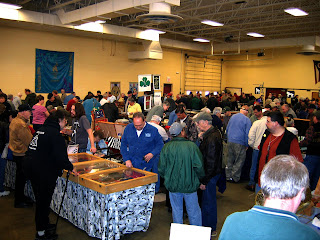 I meet a young man who bought a Boker ceramic bladed folder with a Titanium handle at a flee market for $10.00. It’s a little worn, but the new list price is $285. He was hoping to find a good deal at the show, I doubt it , but you can never tell. 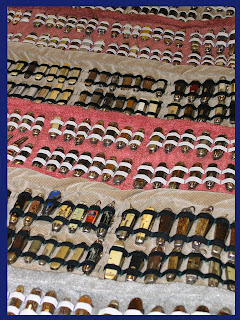 Surely, there must be a treasure in this display.  Actually there was.  I fould a spatula knife marked "Arthur Thomas Co." (A famious name in scientific equipment)  At $80 it was out of my price range.

The hall was packed with vendors and potential customers, as well as a few tire kickers. I sold quite a few Rough Riders, chiefly Sunfish and Elephant Toenails as well as CRTK new Ken Onion design Ripple. I was planning to keep that one, but someone wanted it too badly. 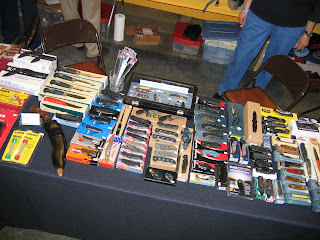 I’ve heard a lot of questions over the years. “Who makes that knife?” “What’s the steel?” “Who are they? I never heard of them before?” One I hear and dread is “Where’s it made?” For many people it is less of a matter of the company reputation as it is not-made-America. I usually remain polite, but I stop trying to help the customer.  They are usually after inexpensive non-existant American knife.
Of course, American made knives tend to be expensive.  Benchmade is now made in America as more and more of Buck. The prices go up. High prices aren’t epidemic only to made-in-American companies. Spyderco, who I think has some of the best knives around, come from Seki-City Japan. They are excellent quality but the prices are hitting new highs.
It’s not often I can be surprised, but I heard a question I never heard before. The vendor next to me sells only high end knives. He had a custom made knife from South Africa, with warthog ivory inserts and an anodized blade. The prospective customer heard Africa and wanted to know if a black man made the knife. I’m still amazed by that question.
at March 08, 2010 No comments: Links to this post