There are few knives better known in the knife community than Spyderco’s Endura and Delica.  Introduced in 1990, they have always been in the top ten sellers at Spyderco.  But there is a new contender, the Endela.

Spyderco’s Delica was the first tactical knife I ever owned.  I owned lock backs prior to a Delica, but never one with a clip or engineered for one-hand opening.  The ability to consistently open a knife with one hand which would lock open was amazing.  From camping to community theater, in fact any daily activity, these knives made an impact.

Police, fire and military all tended to carry an Endura or Delica.  They were strong, lightweight (compared to the other popular “tactical carry“ knife of the time, the Buck 110), easy to open and economical.  The steel retained its edge reasonably well and could be quickly sharpened with the Spyderco Sharpmaker, which I still use.  Both knives still retain the properties of strength, ease of operation and performance.

Long before 9/11 Delicas quickly found a home with airline travelers.  You simply dropped them in the tray with your car keys and pen, and they were returned on the other side of the metal detector almost always without a comment.  Even the partial serrations were not of any real concern.  I typically carried two while my wife carried her Delica.  I use to sit in mid-flight and cut open my in-flight snack.  That makes me feel nostalgic.

As a purveyor of edged steel, I am more than qualified to state the obvious:  No matter how well designed, no knife or series of knives is perfect for all users.  One only has to look at all the available glove sizes to realize that.

The Delica and Endura are the Baby and Papa Bear that drunk blonde, Goldie, finds when she breaks in to a fairytale home in the woods.  So what fills that middle spot?  Consumers asked for a bigger knife that was smaller than the Endura.  Spyderco found an answer, the Endela.

Let’s do a three way head-to-head with the new addition to this family of edges, the Endela.

As you can see, the Endela looks a little like the middle child.  The blade is about a half inch larger compared to the Delica, but 0.4 inches smaller that the Endura.  Blade thickness is pumped up by 0.03 of an inch, but its 0.01 inch thinner than the Endura.  You’ll see that trend in the other knife parameters too.  The Endela is a noticeable step up from the Delica, but almost a twin to the Endura. 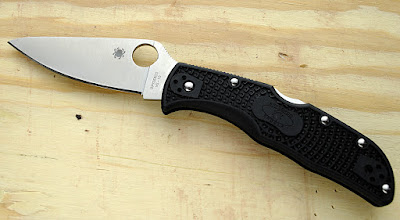 Frankly, the Endela seems to be an answer in search of a question.

The full serration has amazing cutting powers.  Packing straps, seat belts, heavy rope all come clean to its power.  The little defensive edge training I have taken strongly suggests I don’t want to be cut by a Spyderco serration.

The Endela market, according to Spyderco, is for those of us who want a larger knife than a Delica, but smaller than an Endura.  Hence the mash-up.  Not the most original, but….. 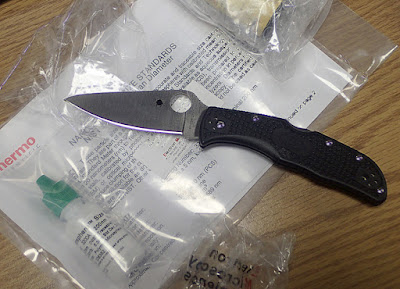 The difference is in the feel and use.  I like the Endela.  It feels good in my hand and if I was a first time buyer, I’d get an Endela.

It will be interesting to see if it’s in the 2021 catalog.