The show?
It was fun.
The hard part is the set up.  The tables are in place when you arrive.  You start setting up, knowing you have a 6 foot table to fit 8 feet of stuff.  You haven’t met your neighbors yet; the customers haven’t arrived yet and soon the vendors will be trading among themselves.  Everyone is excited!
Every kind of knife can be found here.  From the used and abused collectibles… 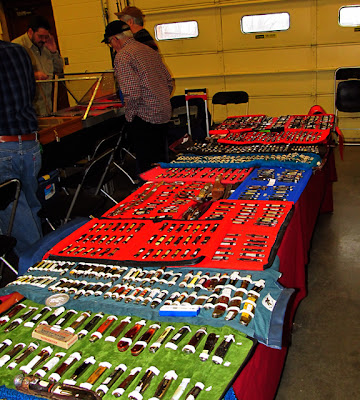 ...to the ultra high-end knives made by Master Bladesmiths.
The WRCA club staffs the administrative duties and they go out of their way to help both the vendors and customers.
I found a great new knife made by Larry Withrow from Charleston, WV.  Both his leather work and forged blades are incredible. 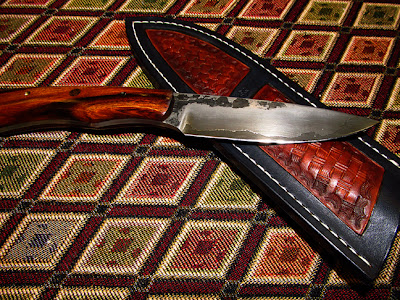 The steel is a high carbon 1095 San Mai with a Desert Ironwood handle.  It just caught my eye and I was quick enough to beat out several other buyers. Lady luck smiled on me.
The blade is so slightly hollow ground it takes a straight edge to see it.  Larry tells me the knives are in demand with hunters in the Texarkana region.
One of my favorite people is Joe Kinches, who is the only Ohio Flint Whisperer in existence.  He must be.  What he coaxes out of the flint, which is a flawed, brittle rock, is amazing.
His display won Best Display 2012.   I like his work and I think it was well deserved.
Here’s a few pictures of the show.
What can I say?  The vendors had plenty of time to talk with the customers. 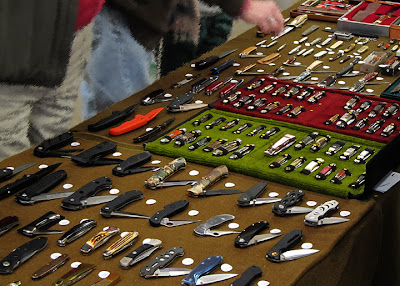 No matter what your taste, collectible knives were available.  Mankind's oldest and perhaps first tool, how you have changed and still stayed the same.

I’m sorry you missed the show.  The vendors are friendly, helpful and love talking about knives.  You would have enjoyed it.
at March 12, 2012 No comments: Links to this post

So, how was the Dover Knife Show?


It depends on your definition of success.  My answer is colored by the poor sales most of the vendors (and I) had.  One insider told me the head count for Saturday was 160.  That means the ratio of potential buyers to people behind the tables was anywhere from 2 to 4.  Potential sales depend a lot of foot traffic and a high ratio like 20-50.
It also means on Saturday the most the club could make in gate receipts was $800.  Not so hot considering the work that goes into organizing.
Sunday was worse.  The majority of sales were between vendors.  It’s nice to sell, but it’s kind of like kissing your sister.  It’s a kiss but you’re not getting anywhere.
I didn’t hear of any of the Warther family showing up either and that was a disappointment.  Especially considering it’s the Dale Warther Memorial Knife Show.  It begs the question, is Warther Knife a spent force in the knife community?
One insider told me that not only has production of Mooney Warther’s fighting knife stopped (Mooney stopped at the end of WWII, but nobody picked it up after he died), but so has production of folders.  There doesn’t seem to be any interest in new steels or increasing the number of knife lines.
“Maybe when the kids graduate from college…” was the most optimistic statement I could find in regard to production or changes.  Maybe.  And just maybe the company will just be treated as a cash cow, you know, leave it alone and milk it.
It’s easy to bitch but difficult to come up with solutions but I’ll try.
It seem that increased foot traffic comes from advertising.  This could be expensive, but there are some things to try:
Put a sign in front of the armory a week before the show.  If that’s prohibited I’d stick a sign in the front lawn the day of the show and plead ignorance if confronted.
Create a Facebook presence for both WRCA and the show.  I’m old, but social media seems to be the drug of choice of the younger set.
Get on community calendars on the different medias.  I’d stress the collector and art aspects of knife collecting and pitch it as a public service.
Ask the vendors to advertise their presence at our show on their websites, blogs, tweets and Facebook.  After all, it’s to their advantage to get their fans out to see them.  And what about e-clubs?  All those forums and clubs that have no physical reality other than people on their end of the internet.  Surely we can generate some interest.
I’d collect e-mail addresses from everyone by having free door prizes drawn at the next WRCA meeting, winners to be notified by e-mail.  I’d get the door prizes from the vendors and use the e-mail addresses to blast out updates and reminders about the next show.
The thing to remember is no one person has to be in charge of everything.  Just ask someone to do one small thing like create a Facebook page for the show and help the officers update it.
I bet there are a lot of ideas I haven’t thought of.  I also bet some will work better than we suspect.
Enough of that, what was the show like?

I just received two new knives from Columbia River Knife and Tool and I have mixed feelings about them.
I was very excited about the Fire Spark.
It’s a new addition to their black box professional line.  (Gee, I wonder who they are copying.)  I really like the way the knife looks.  Spear point blade with false edge, black blade and outburst opening system which opens the knife with a little thumb pressure.  Very nice indeed.
But then add the Lake and Walker Knife Safety System (LAWKS) which prevents the open knife from unlocking during use and the knife should be a world beater.  The metal handle has a nice G10 insert and is tapped to accept the clip in all four locations, tip up or down and left and right.  I talked to CRKT years ago about doing that on their knives and was stonewalled.  I’m glad to see the change.
All and all, it’s a good looking knife.
Except it doesn’t open very well.  On my knife, the blade only opens part way.  No, I’m not hampering it with my fingers and I’m giving it enough of an opening shove.  I also don’t like the way the spring rattles in the knife when it’s open.  That’s preferred to rattling when closed, but still knives shouldn’t rattle.
What really has me spooked is it doesn’t match the images on the CRKT website.  Maybe the images are from prototypes.  Maybe there’s been a design change.  Maybe, maybe and maybe….
Nope, it’s going back!
I also got an M21-02GL.  It’s a true left-handed knife.
With most liner lock knives your right hand thumb pushes the liner lock to the unlocked position and you close the blade.  For lefties their thumb must pull the liner lock over.  That’s not easy, but it’s not impossible; it just takes a little more practice.  This knife has it reversed.  The left thumb pushes it to the unlocked position.
The Auto-LAWKS is located on the left side so the left thumb doesn’t accidentally bump it off as you move the knife around in your grip.  It’s also easier to manipulate with your index finger when closing.
Like all the M16/M21 knives it has the flipper that enables you to open the knife so fast, so easy and efficiently you’ll wonder what’s all the hubbub about automatic knives.  The G-10 scales are textured and give you great grip.  But the knife is set up for only tip down carry.  Bummer.  I guess they haven’t gotten the message after all.
Okay, I’m not a lefty.  My sister is and I remember the bad old days when everyone forced you to be a righty.  She had it pretty hard in school and the world doesn’t make too many products for southpaws.  So I’m very happy to see the possibility of a line of real left-handed knives.
It was funny, but not fun, to watch right-handed people try to use this knife.  I practice with my left hand a lot.  I struggled a little.  Maybe the best reason to own this knife is to remind us of tolerance for people who have difficulty doing a task we find easy to master.
If you carry a knife in the left pocket, you might want to check it out.
at March 04, 2012 No comments: Links to this post