Counterfeit products are the bane of modern life. Would you want to land in a Boeing 737 if you knew counterfeit bolts were used in the landing gear and brakes?

Sure, you got a great deal on the Spyderco counterfeit the guy was selling outside the entrance to a county fair. What, did you really think that you could buy a Paramilitary 3 for 30 bucks because it didn’t have a box? And when the lock fails or the blade snaps I hope you are not doing anything important, like building a fire when you’re lost or some other dire circumstances. 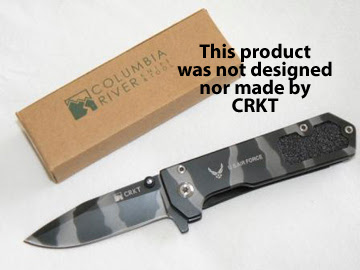 Buying online isn’t a guarantee either. Here’s a slightly truncated version of an article from the March 28 2018 edition of Knife News.

A recent study by the US Government Accountability Office (GAO) confirmed that consumers who buy from third-party sellers on major online e-commerce websites risk ending up with counterfeit products.
Although no knives were included in the GOA investigation, they report that more than 40% of purchases made through third-party sellers on sites like Amazon, WalMart, eBay, and Sears turned out to be counterfeit. Amazon, the largest online retailer in the U.S., has more than 3,000,000 such third party entities participating in their Marketplace. Sales through the Marketplace make up nearly half of Amazon’s total business.

According to industry watchdog The Counterfeit Report, “Amazon’s 13 global websites operate under a huge legal loophole, virtually immune to prosecution. The foreign sellers are difficult to identify and escape liability.” The glut of sellers and inconsistency of product listings make it hard to discern fake from genuine products. “Amazon also utilizes a crafty approach to avoid removing reported counterfeit listings claiming ‘Your trademark must be in registered status in [each country the item is sold in],’ ignoring their own counterfeit policy,” The Counterfeit Report points out.

According to The Counterfeit Report, Amazon emulates the notorious eCommerce outlet Alibaba, which has been on the Office of the United States Trade Representative’s Notorious Markets List multiple times, most recently in 2017.

(I found Randall knife look-alikes several years ago at Alibaba. If you didn’t buy your Randall knife from Randall, are you sure it’s real?)

Other products are shipped from and sold by Amazon directly. Buyers often assume these products are the real thing, but in 2016, Apple found that 90% of chargers it purchased directly from Amazon, using official Apple imagery on the product listings, were fake and even dangerous.

As early as 2015, Spyderco said they could not authenticate or otherwise guarantee the genuineness of any knife purchased from Amazon “due to their practice of co-mingling inventory with their 3rd party marketplace vendors.”

(Still don’t think counterfeits are a problem? Where did you buy that protein powder and health supplement from anyway? Could they not only be worthless, but actually harmful?)
But, if you want to reduce the risk of ending up with counterfeit knives, your best option is to buy from a reputable knife dealer.

Beauty and the Ugly Knife

Fit, finish and function, the 3-F’s of the knife world.

One might ask does a pretty knife work better than an ugly knife?

By pretty I mean fit and finish.  Does the knife use phosphor bronze washers, or plastic.  Are grind lines polished out of areas you can barely see?  Are the screw heads countersunk or a little proud?  Does the closed blade sit even between the handles or does it touch one side?


I see customers not purchase a knife because the closed blade isn’t symmetrical in the handle.  In most cases it doesn’t affect the ability to open or close the knife or the sharpness of the blade.  It isn’t pretty, that’s all.

Enough with the rhetorical questions and dialog.

When you buy a knife the only question you need to answer is, “What is it’s purpose?”


I have very nice knife from Pro-Tech.  I paid more than I normally would, but its beauty spoke to me.  The fit and finish is superb.  I don’t plan on ever using that knife, it’s a Safe Queen.

I also have a Khyber I bought 40 years ago.  It was before the current tactical knife age but just after flint knives.  The blade doesn’t have washers; it rides on the metal liners and opens with a nail-nick.  I built a lot of camp sites with that knife.  It’s a tool.

Nick Shabazz in his words “...A reviewer and gripper in the cutlery world…” splits his opinion.  On budget priced knifes he suggests that fit and finish is less important than it is in $100 plus knife.  Nick sees fit and finish as hallmarks and guarantees that the manufacturer knows his business and has produced a quality knife.  Part of Nick’s gig is to act as a gadfly to encourage makers to put the little effort in to improving their knife.

I like Nick’s writing and I understand his point.  I can buy a Buck 110 hunter with a leather sheath at Walmart for under $57.  I can live with a slight misalignment between bolster and wood scales.  The spring bar at the bottom of the blade channel shows faint mill marks.  I accept this as I know the manufacturer needs to make a profit and the extra 3-4 steps to make the knife perfect would push the price out of many users reach.  But when I get to $150 plus mark, I want the fit to be perfect and all the machining marks polished out.  But more important, I want durability!

But here’s the thing.  My pricy SOG Spec Elite and my Buck 110 hunter perform the same for me.  I shave wood, build fires, cut rope, chunk meat for cooking, and open envelopes with equal versatility.

Earnest Emerson sees it differently.  In his blog from April 2013 he states “I’ve never built the knives for looks or for a fancy finish or perfection.”

His knives are often compared to the knives of Chris Reeves and Sal Glesser and Emerson admits they have fine fit and finish.  But he goes on to say (let me abridge this) none of those knives were present when Somali pirates were killed, when Al Zarqawi killed, when Khalid Sheikh Mohammed was captured and Osama Bin Laden was shot dead.

I also realize that Emerson knives carried by elite teams are purchased by the military.  You don’t think the SEALs roll out on a mission with anything other than authorized primary gear, do you?  So perhaps Ernie’s claim needs to be illuminated with that light.  Still there is no question Ernie makes great, dependable knives.

To Ernie, a knife is tool and needs to be up for the work it faces.  If you are about to embark on an adventure, you want in Ernie’s opinion, a suitable tool.


I understand that as well.  I would never take my Olamic Busker white water rafting, but my Spyderco Salt would be clipped in.  But I wouldn’t take an Emerson knife either.  The possibility of losing a $200 plus knife when you have to pay for it alters your perspective.

3-Fs: Fit, Finish and Function.  These terms only are defined by purpose.  I marvel over art knives.  I own one, but I’d never use it at the range to pop stables out of a target or move meat around in a skillet.

My work knives aren’t always the prettiest but they are tools.   I guess it means I’m pragmatic.