Bad news, my computer is sick, perhaps terminal. While smoke did not pour out the back, I kept getting notices of physical data dump in progress every time I went to use it. The IT guys are trying to recover my data, but I think I’m on my way to a new laptop.

However, the international brotherhood of blade spies was able to e-mail one last tid-bit which I was able to follow up on before the computer incident.

For those of us following the introduction of the five-bladed disposable shavers, I have astonishing news.


Thanks to the Freedom of Information Act, I have discovered an unnamed company has been developing a 7-blade disposable razor which will truly be revolutionary and provide an impossible close shave by anyone’s definition.

The company, whose identity was redacted in the report, provides scientific technical support for CERN, the European Organization for Nuclear Research. During the search for the Higgs boson, CERN has produced small, but stable amounts of condensed matter typically existing only at the heart of collapsed stars. This material has been named Collapsium, for the strong gravity field it produces.

I’ve discovered plans that call for the incorporation of Collapsium at the edge of each multi-razor blade. The dense material will create gravitational anomalies causing microscopic shifts in time during shaving. This will allow you to shave, before they grow to the surface of your face, tomorrow’s whiskers today. Under normal use, your beard will never produce stubble, leaving your face baby-butt smooth. Why any man wants a baby butt for a face is beyond me, but I do know a few butts.

The classified document was obtained from the EPA because of an environmental disposal problem. Frankly, the physics and quantum mechanics were too advanced for me. I was able to connect, thanks to Facebook, with Professor Ian Michal Mountebank PhD, retired, of the University of Barsoon, who explained the problem.

I M (as he likes to be called) suggested the main difficulty is the disposal problem. While the blades will never wear out, since they are cutting tomorrow’s whiskers, they will be thrown out in favor of a newer novelty. The collection of such powerful time distorters in a landfill will cause a temporal rift connecting past and future razors.

This rift or wormhole will cause the future blades and surrounding garbage to be (have been, are, were – English has such difficulties with time travel) sucked back to the present. The paradox of having the same razor twice in the same time frame will exacerbate the rift causing more future and past razors and garbage to continually build up in a vicious cycle. Finally, sufficient Collapsium will collect in each landfill and the resulting gravitational influence will overcome electron cloud repulsion of normal matter.

You are entering the black hole zone.  Please fasten your seatbelt!

A black hole the size of Cleveland will form and end all life on earth in a matter of hours.

The company is seeking an exception from EPA landfill regulations.
at July 25, 2010 2 comments:

GUNS
It’s been a busy week. One of the clubs I shoot at had a monster-sized bull’s-eye match. It’s called a 2700, which means you shoot 270 rounds each with a maximum value of 10 points. The targets are concentric circles on paper and you plink away at 50 and 25 yards. One handed, please, with no external support the way Roy Rogers and Tom Mix did it.

How big? Very big! So big the Army, Marine and All-National Guard shooting teams bring their armorers in semi-trailers. We even had four people from Australia come shoot with us.


Each day starts with a bang, provided by a black powder brass cannon the English captured during the Crimean war, which is immediately followed by raising the flag and the National Anthem. It’s a heck of great way to start each day!

On Sunday, some of the shooters, having way too much fun the night before, wadded the cannon with their undies. I’ve never seen a bra fly that far before!


Me? No, I didn’t shoot. I displayed knives, yakked with the shooters about life, liberty, safety and self–reliance. The topics seem to roll around to knives quite often.

KNIVES
I’ve been working on a knife a friend gave me. He started making knives by stock removal and it was one of his early tries. It’s very nice and I’ll make a Kydex sheath for it. (I just purchased almost a FULL sheet of 0.048inch thick midnight blue Kydex to work with!!!) 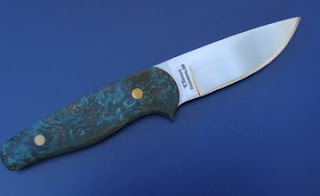 The finished edge on its future sheath
I didn’t care for the knife’s edge angle, so I got out my Lansky sharpener and three sessions later I had a nice 20 degree edge. From there it only took an hour to sharpen it down to the fine stone.


Everyone should at sometime in their life; preferably earlier than later; change the edge of a medium size knife by hand. It’s good for your character.  It’s not the work, even though that’s a good thing.  It’s not the new appreciation of a well turned edge, and that’s a better thing in itself.  No, it’s the sense of accomplishment you get from finishing what you start.

My first attempt with Kydex didn’t turn out too good. And no, I don’t have any images to show for it. I was unhappy with the foam thickness in the press. The low density foam needed to be compressed so much making the press almost impossible to use. Plus, it didn’t transfer the force to mold the hot Kydex sharply around the knife.

So I cut the foam in half.

Because of my design I wasn’t able to get the entire strip of Kydex in the toaster oven. This was complicated by the rack in the toaster oven. I knew from previous attempts if I left it in there too long I’d get parallel stripes on the Kydex. Those lines look good on a strip steak, but not on a knife sheath.


I started with two sheets of tactical black Kydex. Tactical means they can charge more than if it was pink. Both sheets were 0.095 inches thick. One piece was about six inches longer than the other so I could turn it into a belt loop. I used two little brass decorative rivets to hold the pieces in registry and placed the sheets in the oven.

As soon as the plastic was floppy, I pulled the hot pieces out, slipped the knife in and slapped everything into the press. Two squeeze clamps held everything together while I placed C-clamps on either side of the knife handle.


Let me get in a plug for Ansell HyFlex gloves. They are yellow Kevlar gloves with a thin black rubber coating on the palms and finger tips. They take all the hesitation out of grabbing hot Kydex. (http://www.ansellpro.com/hyflex/11-500.asp).


By now the sheath has cooled. Still didn’t get that high definition impression of the knife in the plastic I wanted. Maybe it wasn’t warm enough, maybe it is too thick, maybe the low density foam is too soft. Next iteration, I’ll make changes.


I used a number two pencil (brings back memories of test taking in school – make sure you completely fill in the box with your number 2 pencil….) and drew the outline I wanted. I marked where the decorative faux rivets would go and set up my drill press. I soon had the rivets where I thought I wanted them. Next step: cutting it out.

In my excitement of actually making a sheath, I kinda forgot that I don’t have a band saw. My original plan was to use one at work during my lunch hour. That also was forgotten. I grabbed a coping saw and started cutting. Time for sanding.

I bought a set of little sanding drums for my drill press and before I knew it I was rounding the edges and shaping the sheath into not what I wanted, but by my placement of those damn rivets.

I used a piece of wood with rounded edges to act as a belt template and heat gunned the excess Kydex in to a belt loop. Two 7/32-inch holes for my Chicago screws and the sheath was finished.

I didn’t like it. The brass rivets looked hokie and I was concerned about their holding ability.

Online I found pricey black aluminum pop rivets, but I wanted to keep the cost down on this experimental project. I replaced all the brass rivets with aluminum pop rivets with backing washers. (They popped right out with a pair of side cutters so maybe my concerns about them were valid!) I peened the back of the rivets down with a ball-peen hammer using a bar of polished steel as an anvil. This worked well. 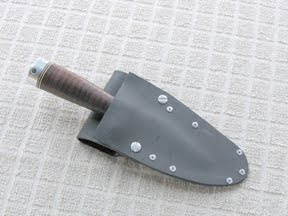 Front side- Yes, there is a knife in all that Kydex. 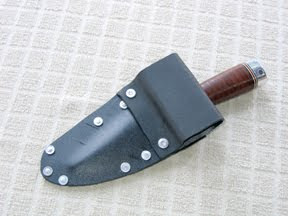 (back side)
So, there it is. Not quite what I wanted, but it’s a functional sheath, holds my knife securely, and protects me and the blade should I take a tumble with the knife on. 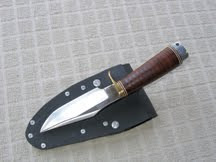 Not quite the form fitting I had in mind

I’m going try thinner Kydex, maybe a combination of thickness: thick to form the back of the sheath, thin to mold the knife. And I’ve got to replace the grill in the oven. I need to plan rivet placement more and I need to find a better way of belt looping it. I’ve seen the new Tec Locs, but I’m not sure about them. I want to keep the overall cost low. It is, after all, just a hobby. 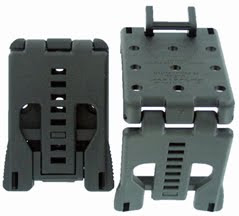 I do like the new Tec-Locs, the locking bar is no longer a seperate piece, but built in

Oh yes, let’s not forget the foam in the press. My wife found what I think is the perfect foam. It even has a cross-hatch pattern.
at July 05, 2010 No comments: