Fine and Fancy Knives at Christmas

Another Christmas has arrived and departed and on the whole it was pretty good.  Not to say it couldn’t be better, but Lord knows it could have been worse.  I was with family of which most are friends; the food and drink was good, and the weather was good for traveling.  We were all warm and had homes to return to and jobs waiting for us today.  Having spent two Christmases in the last eight years unemployed I cannot tell you how nice that is.
I had a chance to handle a spicy little knife from Santa Fe Stoneworks.  The handle isn’t stone (surprise!) but dyed wood.  It’s from their Kaleidoscope collection.  Santa Fe still has a few pre-bankrupt Camillus brand 3-inch lockbacks which they are using up.  It’s a nice knife, especially since you can get it for less than 50 bucks.
I was waiting for my mystery knife.   The clues consisted of a generic policeman and a woolly mammoth.  My Spyderco Police model with blue and green dyed woolly mammoth molar grip arrived!
Hurray!
It arrived as a fully serrated edge and not the plain edge I ordered.
Booo!
Still, it is a spectacular knife.
Banging on the Door
Had a minor incident the other night.  Banging on the front door at twilight brought me around to the side door.  A fellow with a hard sell about shoveling and a calcium chloride treatment tried to convince me I wanted his services.  I wasn’t interested, but he didn’t want to take no for an answer.
One of my concerns is the “criminal interview.”  It’s like a shark bumping into you to determine if you’re lunch or another shark.  His hard sell felt like a shark bump.  Of course, standing there with a sharp CRKT Crawford/Kasper folder in his blind spot (with my thumb on the stud) made it a lot easier to bump back.
As my friend Tom says, “No blood, no foul.”
Lanyard Making
My wife has gone back to her oval-hole Benchmade Ascent.  It was made with an opening stud as well as a round thumb hole.  She has both the round and oval hole versions.  She has also discovered how nice a lanyard can be for retrieving the knife.  Since I like to do knotting and such she asked me to make her a lanyard and I was happy to do so.
First we picked out the colors and the pattern (square or spiral) and I went to work.  A lanyard should be fitted to the person and knife, so I started, first with a fitting to make sure the lanyard would lie flat when the knife was in her pocket.
After a few trial and error starts I got the size of the loop on the knife right and then we were off to the races. 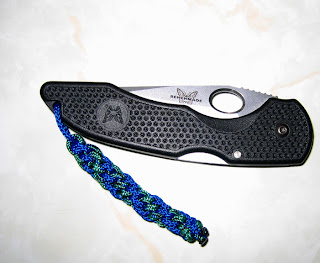 A Christmas Wish - With an Edge

This year I’m not asking for my usual Christmas wish of Peace on Earth and Good Will to Men.  I’ve been asking for this for over 40 years and I’m still coming up short on the request.
This year I’m asking for Understanding, Prudence and Fear.
Understanding so that we understand the other person and they us.  From understanding we can begin to solve our problems or at least minimize our conflicts.
Failing understanding, I want prudence, the gift that lets us ask about the outcome of our intended actions.  Maybe then we will think more about the last drink for the road, planting an IED, or launching an attack.  All of which would lead to a better world.
No one should live in fear, but maybe a little fear about the consequences of our actions might make us a little better off.  Whether it’s building an IED, repeating a nasty story about your boss, or the decision to make your holiday money at gunpoint, a little fear about blowback might give you pause to try something else.
Christmas is a schizophrenic holiday.
For many it is the beginning of a cycle that celebrates an opportunity to connect with our God.  For many of these same people it’s a time to indulge in lavish gifts and Dionysian bouts of eating and drinking.  Economic factors have forced decisions on many people to celebrate the holidays in what they must only consider as unnatural restraint, while others ponder the crushing weight of bills due in January.  And still there are those who choose to make the holidays a time to connect with friends and family.
Mix all these people together; add the uncertainty of the New Year, spice with enough snow and cold to make doing anything difficult, and you’ll understand why the holidays are so tense.
Despite all that, have a Merry Christmas, and don’t take anything too seriously.  Nobody gets out of this world alive anyway.
at December 22, 2010 No comments: Links to this post

A Slice of Life

The world is a wacky place.  People have strange ideas, customs and responses to problems.   Add a knife to the mix and we see why you shouldn’t play with a saw blade when it’s working.
Take Helmut Seifert for example.  He’s a factory worker in Bielefeld, Germany, and he has a 17 year old daughter.  It’s natural for a girl that age to have a boyfriend, but a 57 year old boyfriend is stretching the limits of credulity.  Fearing that the older man might have some less than honorable designs on his daughter, Helmut went to the police.

Here’s where the trolley comes off the tracks.  Helmut learned the unfortunate truth about law enforcement.  The police are good at drawing chalk outlines, filling out the paper work, and catching the criminals but not so useful for preventing a crime.

What’s a father to do?  Who knew what this fellow had in mind for his daughter?  Drugs, prostitution or simply steaming up the windows of a parked car - take your pick of any, all or none.  Helmut had an answer and acted on it.  He castrated the man with a bread knife.

The victim is expected to survive and now goes by the nickname of Wee Willy.

Helmut isn’t ratting out the names of the men who helped him.  Nice to know you have friends like that.  But a bread knife?

Several years ago I got my wife a Spyderco bread knife.  It’s almost a Roman short sword and the serrations can only be described as fearsome.  I use to enjoy the smell of warm bread, but after Helmut’s adventure, the aroma of fresh bread will only make me mentally check my status at home.

Cutting Off The World For A While

It was time.  In fact it was past time and overdue.  Getting out of the city, away from WiFi and people texting and driving, away from the normal daily grind that saps our will and drains our soul and reduces us to flotsam on a sea of disaster….  You get the idea, a break was needed.
One of my favorite getaways is a state park in West Virginia.  The cabins have flush toilets, running water, heat and a fireplace. 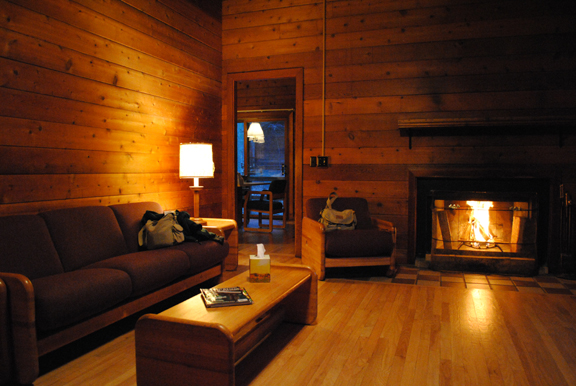 Of course, there’s hiking and deer-watching if playing dominoes, cooking with your friends and good conversations aren't enough.  I had hoped for a dusting of snow to cover the ground to hide the wear and tear we humans inflict on nature, but I didn’t get it.  Still it was nice enough.
As a scientist I know that increasing the surface area while decreasing the volume will make the wood burn better and what’s a fireplace without a fire?  So I split the wood the park provides.  I came prepared with a ¾-length axe and a hatchet.  The first day left me with sore shoulders.  While I expected some soreness, this was medication-level soreness.  Only one thing to do: sharpen my axe!
I typically take my Spyderco Sharpmaker and an EZE-Fold sharpener when I travel.  One side of the EZE-Fold is a coarse diamond.  Flip it over and it’s a fine diamond.  It didn’t take much work to true up my axe edge.  The next day, lots of wood but no soreness.
The trails are marked, but still it doesn’t take much to wander off the path, so it’s prudent to take a few things with you.  The yuppie canteen or water bottle works nice as do a small flashlight, knife and personal space blanket.  Matches or a lighter is also suggested. Most of that stuff fits in a coat pocket, so you don’t look like you’re the last member of the forgotten survival squadron.
The two knives I like (yes two, check the archives for why one is none and two is one) for these adventures are the Buck Nighthawk and DPx H-E-S-T.
The Nighthawk has the mass and edge I needed to free up a sapling or tackle a big knife job like quartering wood.  It doesn’t work too good for cutting fir sticks.  The blade is too thick, but if I ever needed a big knife, the Buck Nighthawk is a great starting place.
DPx H-E-S-T is a collaboration between Robert Pelton and RAT Cutlery.  H-E-S-T stands for Hostile Environment Survival Tool.  DPx suggests a prescription for Dangerous Places.  I met Pelton several years ago.  He wanted a knife to carry in some of the world's most dangerous places, like Beirut, Sierra Leone or Detroit.  Not too big or expensive that it can’t be conveniently lost or given away and still big enough to attend to survival chores or make hesitation cuts in people.
My only complaint is the sheath has only a makeshift lashing for belt carry.  Who knows, maybe that’s an advantage in dangerous places.  For me it drops into an outer pocket on my winter coat and stays there until I need it.
It was a good weekend and I’m back to work.  Let’s see how long the recharge works.
at December 07, 2010 No comments: Links to this post