I’m not sure where this belongs - in my Tactical Blog or my Knife Blog.  I don’t write a social WTF blog, which is where the next two items really belong.

Great Britain once commanded an empire that spanned the globe.  Explorers, merchants, settlers and military opened up continents and brought the English version of culture and civilization to the world.  But now England has become afraid of knives.

Having continually reduced the number of firearms owned in England without eliminating crime, the English government has refocused on outlawing knives.  England has put drop boxes where you can anonymously drop off your knife.  Since London has an extremely high level of CCTV coverage, I wouldn’t believe that for a moment.

Recently criminals robbed a ‘knife surrender bin.’  Police claim they have CCTV footage of the criminals hauling away the weapons collected by police as part of a knife amnesty.  No comment has been made about the imminent arrest of these fiends.
If there is a lesson, it’s criminals always find a way to get the tools they need.

On a similar note, London’sRegents Park Police said that a local charity shop had handed over a collection of potentially dangerous edged weapons to prevent criminals buying them.  I can only assume the owner has some hidden agenda or he’s mentally handicapped but perhaps not as badly as the police who posted a picture of several knives, including a letter opener, a practice fencing foil and a spoon as part of this cache of deadly knives. 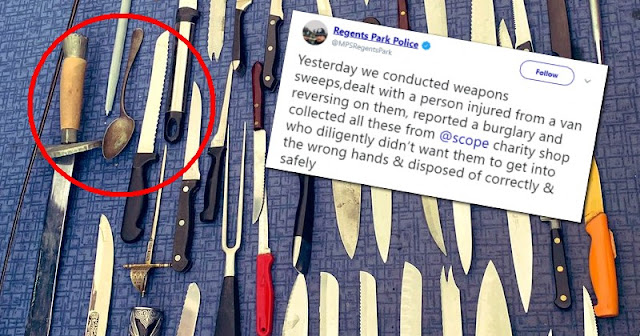 I can almost see the arch fiend jumping out of the shadows with a fencing foil in the number 2 guard position, a spoon in his other hand to break up your circular parry and the letter opener tucked in his sash for close quarter combat.  Surely he would be bare-chested and wearing black yoga pants, a red lined black cape and floppy hat with feather!  En-garde!

I blame England’s anti-knife movement on the government’s inability to deal with crime and it is their attempt to move the public eye off themselves an on to weapons as the cause.  America’s doing much of the same thing.

On a more serious note, the Tuesday, May28 2019 Akron Beacon Journal reports a local Tokyo man charged a group of school children at a bus stop waving a knife in each hand screaming “I will kill you!”  Nineteen people were injured including thirteen children.  At least two people are reported dead.  I don’t know if that number includes the attacker who slashed his own neck.

Again more proof that criminals and crazies will find the tools of mayhem they need.

What does this have to do with knife collectors?

Your knives are actually weapons and as responsible collectors we must secure them from theft and misuse.  You can also expect that at some future point you will be vilified as a collector of these dangerous weapons.  We only have to look as the history of legislation of automatic knives.

In an effort to increase magazine circulation, articles were published about these ‘toys that kill.’  To appear pro-law and order without any actual work, politicians banned automatic knives.  As collectors we are still struggling with these silly laws and their ramifications.

Unlike England we have a Second Amendment.  We have organizations like the American Knife and Tool Institute and Knife Rights to stand up for us.  Join them, buy a membership and help them out.  Remember the alternative.