WWII wasn’t the first war to have enemy combatant’s dressed as civilians. But it is the war we seem to most associate with covert weapons and spies.  The problem for agents and spies is a weapon found on your person discredits your claim that you’re something harmless and can be ignored.  Yet having a last resort weapon could be the difference between death by torture and escape.

OSS and later the CIA developed little hideaway last resort tools for their agents as did many other domestic and foreign agencies.  We are fascinated by these James Bond devices.

There probably isn’t anything more fascinating then the OSS “lapel dagger.”  It was just a small thumb-size flat piece of sharpened steel that could be sewn behind lapels, inside pockets, or just about any place.

The key to placement seems to be to:
One: sew it where it wouldn’t be found in a quick search,
Two:  sew it where arresting officers would expect you to place your hands in response to their orders.

I had always wanted an authentic one, but twenty years ago A.G. Russell came out with their version of a undetectable lapel dagger. 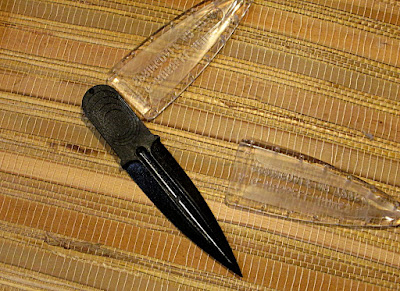 It is about 3.75 inches long with a 2.5 inch double sided blade.  It’s made of plastic and frankly, I don’t think it would survive more than a couple quick stabs before the blade snapped.  But that’s all you might need to get your feet under you and escape.

It came with two plastic sheaths so you could move the dagger between coat and another location.  One can almost see Bond moving it from his suit coat to his pants pocket unnoticed.  Each sheath has small holes to facilitate sewing.

At the time Russell also came out with a dagger shaped like their Sting but made from nylon filled with glass fiber.  It was advertised as a CIA letter opener.  I remember the claim that you could resharpen it with a coarse file.

The knife is about 6.75 inches long with a 3.25 inch blade and 3.5 inch handle.  It is substantially sturdier than the lapel knife. 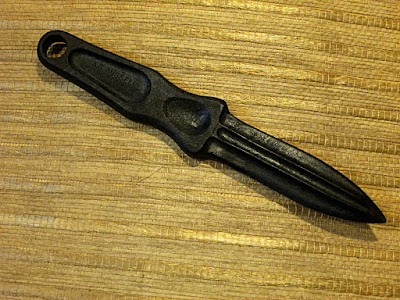 Both of these were on sale during the very early days of metal detectors at airports.  At this time you could carry a smallish knife like a Spyderco Delica through security.  You declared the knives by placing them in a small basket with your wallet which bypassed security.  There was often some question about partially serrated edges, but most of the time the knife passed and you carried it on the plane.

Don’t even think about it today!

You can find an almost identical lapel knife at: https://lapolicegear.com/imminent-threat-solutions-black-glass-filled-nylon-lapel-dagger.html

But at this time they are out of stock.

Cold Steel makes a variety of plastic knives that are almost undetectable.  They used to come with removable metal rings to ensure they could be seen when x-rayed.  They may have simply given up on the pretense of detectability and saved the customer the problem of removing the metal rings.

Lansky also makes a very passable plastic dagger they promote as a box or letter opener.

Take a look at these.  Just ordinary pocket change, like you get from a thousand different purchases.  Or is it?

Now take a look at this picture.  Same coins but something is significantly different.

That’s right, the nickel has a blade.  It’s a very sharp blade.  It’s sold by Shomer-Tec.  I got mine from a good friend, Bob.

This is one of many products you’ll see aimed at people who travel in third world and failed countries.  In these locations kidnapping, abduction and murder are relatively common and quite anticipated.  FARC is a perfect example.  The great majority of their funding (even revolutionaries need to be paid) came from drug running and ransom kidnappings.  Having a hidden or non-detectable blade could be the difference between self-rescue and spending three years with an ear cut off while your family attempts to negotiate your release.

Think I’m blowing hot air up your skirt?  Check with your friends who travel to these countries for big companies.  They have hostage insurance and training for the traveler to look less like a target as well as special security.  Tell me again why you think you’re safe at Cozumel?

You don’t really use this blade.  It’s designed to help free yourself from cord or zip-tie imprisonment or as a last ditch effort to escape during the initial stage of an abduction or assault.

It does remind me of the devices invented by OSS and others to help Allied prisoners-of-war to escape.  I have a plastic copy of a lapel knife worn in a sheath sewn in jacket lapels or in coat sleeves.  The originals were metal and quite deadly.

Growing up in the 50s there were a lot of articles about these efforts.  I remember jacket buttons that would unscrew to reveal a simple compass.  When the Nazis caught on they made them with reverse threads so it was righty loosie, lefty tighty.  Uniforms were redesigned so simple alteration would make them resemble men’s suits and ballpoint pens containing an ink that would dye a re-tailored uniform to typical suit color.

Escape tools aren’t anything new.  Still, this is a very cool knife.