My friend just showed me a silver-bladed Gerber Guardian Back-up he bought. It’s a nice knife. Actually it’s a dagger and while I like the lines, the lack of guards and its double-edged blade always make me a little nervous. Having sliced fingers open before, I would prefer to avoid it in the future.

He didn’t care that much for the original sheath and since he’s been working with Kydex, well, one thing led to another.

He did a nice job.

The handle locks into the sheath with a positive click and stays there. You have to want to remove the Back-up. It isn’t going to fall out by itself. He mounted a belt loop so that the knife could be carried sideways, kidney position. The clip is also removable so other carry modes are possible. 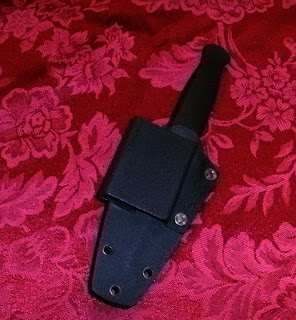 It was nice to sit down at Thanksgiving and talk turkey with him about working with Kydex. I have at least one project stalled due to weather and ideas for a couple other projects. All I can say is nice work!
at November 25, 2010 No comments: Links to this post