Think of France and the laguiole with its bee shaped locking catch comes to mind. Who would draw an image of the Argentina gaucho without his caronera? Let someone show you classic bone-handled stiletto and you can almost see Naples and fields of ripe olives.

Could there be any other knife associated with the United States other than the Buck 110 hunter?

The man standing in frount of my table wanted an American knife to take home to the Orient. I showed him Spyderco’s Native made in Golden, Colorado, I showed him Kershaw’s Leek also made in the states. Those weren’t American enough for him.

I showed him a Buck 110 hunter and his eye lit up. That was his idea of an American knife.   Mine too!

I bought mine 40 years ago. I’ve used and abused that knife. Carried it daily and faithfully for years, it was a part of who I was. Why? Because my Buck 110 never let me down when I needed it. It cuts, stays sharp, cleaned-ups well and went back in its black leather belt sheath without any trouble. I’ve semi-retired it for thinner, faster opening, clip it in my pocket knives, but I still can’t imagine leaving the sidewalk for the dirt path without it. 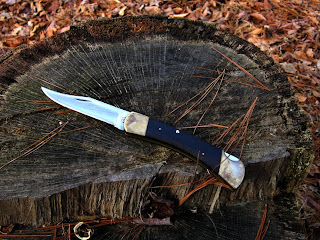 It’s not a perfect knife. The brass bolsters react with the fatty acids in sweat and leather to produce a green goop you have to clean. The knife is clunky, but that’s not necessary a bad thing. The steel holds an edge, but it takes time to sharpen it with the double bevel edge that gave it keen sharpness and strong staying power. More an a few hours were spent with an oilstone and strop making the perfect edge, only to miscalculate and have to start over. The lock is reliable only if it was kept clean and all knives need a drop of oil.

Al Buck’s gift to knife world was realizing that big knives, clunky knives would sell, if you didn’t have to put them in your pocket. The safety of the locking blade and oversize handle that gave you something to grab, found a home on the belt. I knew people who wore a belt just to hold up their Buck knife.