Blackie Collins: Among The Eternals

Blackie Collins the knife maker passed on last week.
He never seemed to get the publicity, I always thought, like Randall or Loveless.  Perhaps it was because he didn’t make exclusive fixed blades.  Instead he designed knives and sold the rights to manufacturers.  Of course, when manufacturers cheapened the design, took manufacturing short-cuts and produced less than ordinary products, you know who got the black eye. As a result it seems much of his talent was relegated to the position of spear carrier while the stars took the center stage.
Still, he founded Blade Magazine, one of the leading voices in today’s knife culture.  His Strut’N’Cut knife helped fuel the assisted opening knife craze.  And there cannot be any doubt this self-taught knife maker influenced what you carry in your pocket.
I had the opportunity to meet him years ago at a SHOT Show in Las Vegas.  I was at the Meyerco booth when the factory rep said:
“Do you know Blackie Collins?”
“I’ve heard of him, but I don’t know him.”
“Would you like to meet him?
Of course I said yes, expecting a short hello, a hand shake and a few seconds of idle chatter.
I got the hand shake and more.
“Would you like to see my newest design?  Blackie asked, while unrolling a 6-foot long sheet of paper.  There, in large scale, was one huge drawing of a knife he was designing.  He explained the design, talked about the steel and manufacturing problems.  It was wonderful and I still regret I didn’t have my present understanding of steel and knives.  I would have been able to understand the significance so much more.
Then he posed for pictures with my wife holding his knives.
Graciousness.  That’s an attribute that fitted Blackie Collins.  I’ve meet other designers.  Talked with knife company owners, even gotten a few freebies to try out.  They have been nice, charming and interesting, but I don’t associate graciousness with anyone else.
I did a quick Google search and found a quote I want to share with you:
“There’s no high like creativity.”  Blackie Collins.
Rest In Peace, Blackie.  We’ll miss you.
at July 27, 2011 No comments: Links to this post

I just received a late shipment of knives.  Trying to anticipate what the consumer wants seems futile.  Well, we all know what the consumer wants: top quality name brands at dirt cheap prices with full and total lifetime warranties against all damages, misuse and loss.  Heck, I want that myself, but I’m not likely to see that either.

But part of the fun of selling knives is guessing the market and trying to get quality products in front of the consumer.  Here are some knives I like: 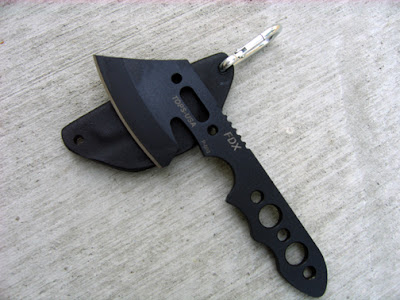 It’s too small to be called an axe, even a hatchet.  It’s more like a cleaver.  The FDX is made of 1095 steel, so you’ve got to take care of it, but it should make better sparks with a ferricium flint compared to stainless steel.  It’s 3/8-inch thick and has a 2¾-inch blade and is 7¼ inches long.  I see it shaving wood tinder, chopping small kindling, disjointing or quartering a freshly caught meal.  I also see it as a great comfort in a dark alley.  I think it needs a cord-wrapped handle and a lanyard.

CRKT’s Kommer Fulcrum has always attracted my attention.  The open blade unlocks like any liner/frame lock but opening it is a little different.

I have a serious bitch with New York City.  With all the social problems they have, the elected officials are attempting to sidetrack the voters with flick and tactical style knives.  There’s a witch hunt for sellers of these types of knives.  Us tool carriers are also on their radar.  So, if you’re going to NYC, this could be the knife to carry, better still…. STAY HOME.  NEW YORK DOESN’T WANT YOU. 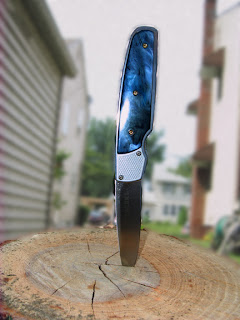 The Kommer Fulcrum is an attractive knife, but then I’m partial to blue and clever mechanisms.

My last knife is also from CRKT.  It’s a little neck knife called the Folts Minimalist. 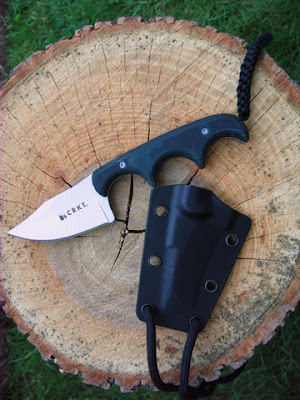 I always like neck knives, but having an unbreakable noose around my neck is troubling.  Still, having a 2-inch stainless steel blade on me is a comfort.

Add a button-battery light and another survival tool of your choice and you have a leg up on getting home.


The Minimalist also comes with a belt adapter.
at July 03, 2011 No comments: Links to this post