I was unpacking my ditty bag and my little Swiss Army-style knife slipped out and splashed into the water-filled sink. I keep a little Kershaw with the ditties because of its multi-functions: two small blades, sturdy little scissors, nail cleaner and file, good tweezers and the all important fruit peeler. A hair blower and a little oil and the knife is as good as new.


I was unpacking from an overnight expedition to Camp Perry for the pop-up spring pistol match. It’s a fun match to raise money for the Friends of Camp Perry and run by the Ohio Rifle and Pistol Association or ORPA. The goal, worthy in my mind, is to improve the lot of service men and women stationed at Perry for tune-ups before shipping out. A very worthy goal.


At most, two targets stand and you have to shoot them down. You get about 5 seconds per group, which is plenty of time to tactically engage each target with a pistol. Tactical come from a Latin word meaning ‘shoot the closest one.’ There are several scholars who believe the word actually comes from a different root meaning ‘make it black and cost more.’ What do I know?


I used to believe the targets had a steel plate behind them that sensed the impact and took the target down. This trip I stood in back of one (before the shooting started) and saw no plate, just holes.


It appears the plastic is a ‘self-healing’ material and the impact of the bullet vibrating the target is sufficient to trigger a response. It seems to work for .22 cal through .45ACP. Still, starting with a partially punctured green guy, adding 8 or more holes per target each relay, the 14th or 30th relay shooter starts to wonder, “Am I missing or am I shooting through a hole?” 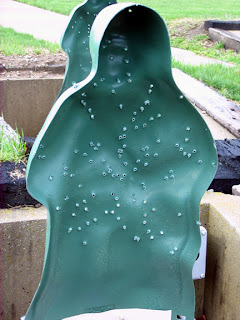 No matter the score, it’s a fun time and we managed to eke out a dry and warm day. Friday was cold and rainy and Easter Sunday is cool and rainy, but Saturday was warm and sometimes sunny. But the wind!!

If you go to Camp Perry which is pressed into the shores of Lake Erie, be prepared for wind, wind and MORE WIND! 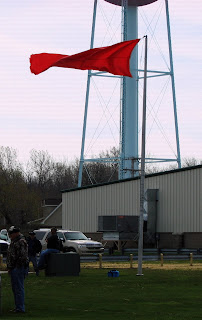 But truth be told (shooting anything .22 or bigger from 10 to 30 meters at a half-humanoid target), the wind isn’t a significant factor. I had a great time.
So is the Kershaw the only knife connection? Of course not. I know in our little group every shooter had at least one pocket knife.
﻿﻿
﻿﻿﻿﻿

Everyone likes getting mail, so when the package arrived, I couldn’t wait to get it open. I suspected it was the sailor’s knife I recently won on eBay. I opened the package and found a cocoon of newspaper. When I sell stuff on eBay I try to pack the item so no damage can occur. After all, once it sells, I am sending it to its rightful owner so I want to be careful. So, seeing the wad of paper, my first thought was “wrapped the way I wrap things!”


Unrolling the knife revealed a grease covered slathered oval shaped object.  Well, there was so much cosmoline I wasn’t sure there was a knife present.


The time honored method of cleaning cosmoline from rifles is to stand in a hot shower in your skivvies and scrub the rifle with your toothbrush. Yuck…


I knew I needed a different way. I did find a site what showed a hot steam method and listed other methods of cleaning cosmoline.


The best I’ve seen was a large two-tub ultrasonic unit at the Knob Creek Machine Gun Shoot. You just opened the bolt and placed it in one tub for half an hour and then into a second bath which contained a rust inhibitor and light oil for a second half hour. When you came back your rifle was waiting for you. The cost was around 25 bucks and everyone who bought a surplus rifle thought it was a deal!


I wiped the majority of cosmoline off with old newspaper and submerged it in a solution of equal parts:


Between an old toothbrush and a spare turkey baster, I cleaned off most of the cosmoline. The blade compartments were too deep for my brush, so I cut a strip of cardboard and scoured them out. Still, it required a lot of soaking. If I were smart I would have left it in the solution overnight, but I was too impatient to wait.

I finally got the gunk out of all the nooks and crannies. My cleaning solution went from a nice clear green to a muddy, turbid gray. I was afraid to use it on anything else, so I disposed of it.


It took a lot of wiping with rags followed by paper towels but I got most of the solvent removed. I suspect it will have to wait for a sunny hot summer day when I can wrap it in newspaper and leave it in the sun while I work around the yard. It would not surprise me if more cosmoline worked free in the heat. 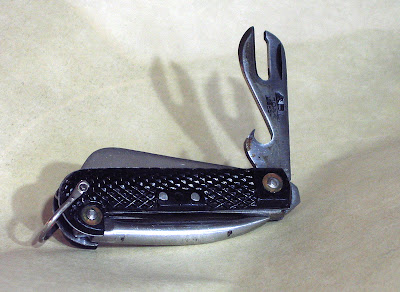 Well at least I don’t have to worry about oiling it or protecting the blade for awhile.

People ask, “What should I buy?  Spyderco Delica or Benchmade Mini-Griptilian?”
Good question, and as of now I don’t know which I would recommend, the Delica or the Mini-Griptilian.
First let’s ignore price.  It isn’t that I don’t want to get embroiled with deutschmarks, yen or dollars, but really,  the difference in money isn’t that much.
Also let’s ignore the stud option on the Griptilian.  That’s one less factor to compare.
Well, that certainly makes it easier, right?
Truthfully, no.  I like the natural feel of the Mini-Griptilian.  The handle swell fits my hand and my wife’s hand equally well.  I like the flat thin Delica as it fits my pockets better.  Both knives open well but the Mini-Griptilian has a slightly smoother opening and a much better closing.
I prefer tip-up carry and I match the knife to either right or left pocket.  Either knife works for me.
Blade length?  If I can’t get most of the jobs done with either blade length, then the job calls for a specialized knife.
Weight?  If you can tell the difference between the knives based on weight, you are one sensitive dude.
I’m not a steel junkie.  Yes, there are some very special steels that give you incrementally better performance, but could you tell in the double blind cutting test?  I’d wager you could with sophisticated testing equipment.  By hand?  Nope!
So where does this leave me?  I gotta go Spyderco.  Mostly for emotional reasons, these knives are tied to me.  The Delica was my first tactical knife.  My first published article was about a Spyderco.  My favorite tactical teacher carried Spyderco.  The first knife I gave my wife was a Spyderco.  And most important, they are completely dependable.
Benchmade, it’s a great knife.  My wife carries them and loves them.  So it remains your choice.  If you can’t decide, well, that’s nature’s way of saying buy them both.
at April 14, 2011 7 comments: Links to this post

All blogs no matter the topic, knife, airgun or apron wearing, all blogs attempt to attract readers. We write blog, therefore we seek an audience. And bigger is, in this case, better.


Let’s cut through the mumbo jumbo and stats we get from blogger or wherever you get your numbers.  We all feel this way sometimes.

Take it away Stephan Pastis’ Pearls Before Swine