There are only a few things one can say are really NEW.  As a chemist I’d say John Napier’s Logarithms in the 1614 were really new.  My Analytical Chem professor had us use logarithms for calculations as hand calculators were not fully invented at that time.

Much newer are bolo ties which were invented by Victor Emanuel Cedarstaff in the late 1940s.

I’ve always thought bolo ties had a sense of flash and uniqueness men need to tap into.  I had to wear a tie in grade school and my fondness for bolo ties forced the school to rewrite their requirement about wearing ties to include a prohibition against bolo, string and bow ties.

This is a defining quirk of my personality.  So when I had a chance to get one of Mickey Yurco’s knife bolo ties, how could I say no?

Mickey has been a knife maker for over 30 years and designs unique blades.  Unique?  Yes, because Mickey brings both a sense of history and tradition while concentrating on cutting.  Boker Knives has picked up two of his designs and the latest can be found here.

While not as well hidden as the OSS lapel knife, the bolo knife reminds me of a last resort, hide-out knife. 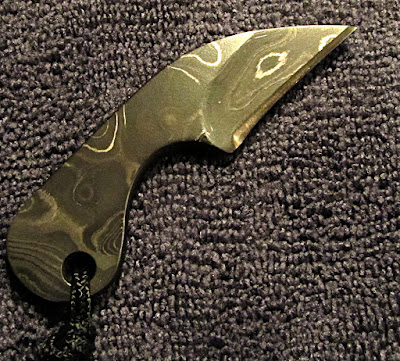 It needs a set of a dozen friction lines about three-quarters of an inch up from the point so the thumb or index finger has a better friction point to retain the use the knife as a last resort tool.  Simply you’re your thumb or forefinger across anything you want to cut, just remember all the places the pulse can be felt just below the skin.

Or you wear it as tasteful man jewelry.  The bolo has the classic black leather braided cord ending in silver aiguillettes and the black leather sheath is embossed with bear foot prints.

Bears are the largest land omnivores in both Europe and the Americas.   Since they can walk upright, they were thought to be special and a reservoir of knowledge.  They are also associated with warrior spirit and prosperity.  More manly traits.

I doubt I’ll ever cut my way out of trouble with this knife, but I like the elegant look.  You can contact Mickey if you need manly fashion accessories or interesting cutting edges at shorinki@aol.com.