I don’t do too many book reviews, but I’m going to do one now.
Let me recommend “A Primer on Folding Knives” by Steven Roman.  I think you’ll enjoy this book.  I know I did. 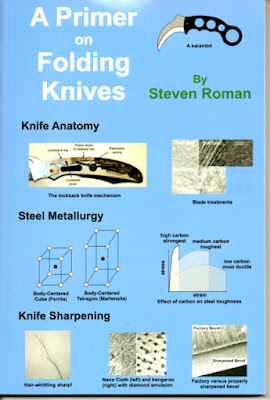 Who is Steven Roman?

He’s a mathematician, currently Emeritus Professor of Mathematics at California State University, but don’t let that scare you.  He’s also a wood worker, pen turner, knife collector and a knife sharpener.  He also likes to write.

The book covers many knife-related topics, like knife companies, opening and locking mechanisms, blade finishes as well as handle materials.  That’s a partial list of chapter one.  Chapter two deals with the complex subject of metallurgy.  As best as I can tell, he’s on pretty solid ground for basic metallurgy.  If you want to find out what elements stabilize austenite or the difference between cementite and aged bainite, you’re going to need a more advanced guide.

Chapter 3 is an intensive look at sharpening.

Face it, knife sharpeners and knife fanciers come in two varieties: those interested in a working edge and those who want the ultimate edge.  We all fall somewhere on that spectrum.  For my barbecue knife I want the ultimate edge.  It’s never going to be used, just shown off.  But the blades I carry, well, they need to be a compromise between sharpness and durability.  Sharp enough I can cut, but not so sharp the first cut dulls the edge.

Steven suggests trying different edges for different steels and working them to see which edge stays sharp the longest.  By matching edge geometry and sharpening against steels you can obtain the optimal best edge for your use.

Most of us will not do that.  It requires a lot of work, standard cutting tests and plenty of notes about observation on your part.  Most of us don’t take the time or make the effort.  That’s okay.  All we want is a sharp knife.  But if you want the best working edge for a particular knife, you need to put forth the effort.