I thought I would do something in green to commemorate the saint that drove the snakes out of Ireland and caused so many others to see them.

It was October 2002 and Knives Illustrated published my very first knife article. It was about the green handled Spyderco Lum.  I wonder what I would say now if I was writing the article.

I’d tell you more about the steel.  Its Japanese steel designed by Takefu Special Steel Co. Ltd aimed at Japanese chefs.  But since the steel is cooked with 1% carbon, 15% chromium, 0.2% vanadium, 1.5% cobalt, and spiced with 0.5% manganese and 1% molybdenum, it was soon popular with many knife companies. 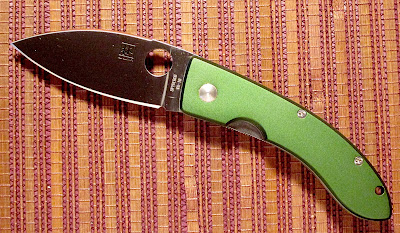 At the time it was a super-steel but now is considered simply really good steel.  It compares well with ATS-34 and 154CM but the higher vanadium levels produce smaller grain size and better stain resistance and toughness.   We’re talking edge retention improvement here.  Spyderco told me the hardness was in the 58-60 Rc range.  The blade was offered as a plain edge as mine was or fully serrated.

The blade is a flat grind with a tapered leaf shape associated with many of Lum’s designs.  The green Almite-coated handle is chamfered to soften both the looks and provide a comfortable grip.  The knife is set up for right carry with an option to alternate between tip-up and tip-down.  I’m a big fan of tip-up carry so I never changed it.

Almite is an anodic oxidation process of aluminum with very good hardness.

Bob Lum was born and raised in Astoria, Oregon and between hunting and fishing and his work as a freelance photographer he developed a keen eye for blade shapes and edges.  He started making knives in October 1976 and is considered the popularizer of the "tanto" style which he based on older classic Japanese style.  The interest in tantos has not faded.  They have generated a love-hate interest in the knife community and will remain an important blade option.

Shakespeare wrote “..the good is often buried with their bones.”  He is wrong in this case.  Many of Bob’s designs and sketches are still being uncovered and sold to top end knife companies.  His son and wife are involved with producing his ideas and you can find them at http://www.boblumknives.com/welcome.html 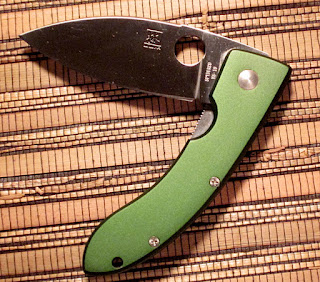 I still carry my Lum.  It has become a dress knife and I wear it for weddings, funerals and anytime I need to notch up my attire beyond business casual.  Spyderco still has Lum designs, but if you want a green Lum Chinese folder, you’re in for a search.  Good Luck!